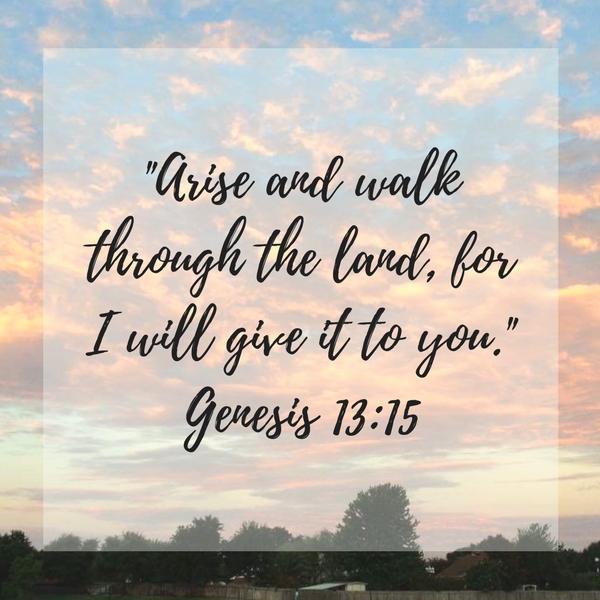 Of course, sometimes we expect bad things to happen too. We give into fear or pessimism or doubt and we expect the worst. But have you ever stopped to think about God’s expectations? Unlike us He doesn’t “expect” in the way we do. He knows exactly what will happen and He’s never surprised by any of it. And what has struck me lately is that God’s “expectations” and His plans have impacts and influences and life far beyond anything we would even dare hope.More than we could ever dream.And that’s where we’re going to pick back up with Abram’s story. When we last left our friend he had set up camp near Canaan. God had called him away from his homeland and had promised to bless him and make him a great nation. The journey started out so well. Sure it was hard to leave home, but the hope of something more keeps him going.However, things quickly turn sour. Famine sweeps through the area and sends Abram and his wife down to Egypt. In an effort to protect himself from harm, he lies and says that his wife is really his sister. As you might imagine, that causes some issues. You see, Pharaoh heard about Sarai’s beauty and was so taken by her that he had her brought into his house. However, after a few plagues brought about by God’s intervention in the situation, Pharaoh returns Abram’s wife and sends them on their way.Conflicts continue even outside of Egypt as Abram settles in another location called Negeb. He settles there with his nephew Lot who has been journeying with him this whole time. Both men are wealthy and have quite a few sheep and goats to keep fed and hydrated. With that much livestock, you’re going to need a lot of herdsman. Unfortunately, Abram’s workers and Lot’s workers don’t get along, and with so many possessions and livestock between the two men, the only practical thing to do is to go in separate directions.I wonder if the suggestion to separate was hard for Abram. I mean, he must have been close to his nephew. When Abram first set out, it is noted that Lot went with him (Gen 12:4). Whether Abram invited him or Lot asked to join, Abram’s nephew is here by choice and seems to be very welcome.

Lot is given first pick of the new area he will live in. Whichever direction he chooses, Abram will go the opposite way. Lot chooses east, the region of the Jordan Valley that looks lush and green and full of life. This leaves Abram to settle in Canaan.I wonder if Abram was a little down at this point. I mean he just got stuck with the short end of the stick as far as land goes; but even more than that, he just said goodbye to his nephew. I just can’t help but wonder if Abram expected Lot to be part of this “I will make you a great nation” promise. Lot’s the closest thing to a son Abram has. And now he’s gone. Perhaps he lowers his gaze and shuffles his feet. He kicks a pebble and as it skips across the ground he’s probably thinking that none of this is going quite like he hoped.And it’s at this point that God speaks up again. It is here that God tells Abram to lift up his eyes and look all around him. “For all the land that you see I will give to you and your offspring forever,” says the Lord. “I will make your offspring as the dust of the earth, so that if one can count the dust of the earth, your offspring can also be counted” (verse 14-15).Buck up, Abram. I know that things might not be what you expected, but look around you. All of this land will be yours! It will belong to you and every one of your offspring. In fact, your family will be so big that you won’t be able to count them all. They will be as numerous as the dust on the earth.Talk about a promise!“Arise, walk through the length and breadth of the land, for I will give it to you” (Genesis 13:15).And Abram went. He tightened his sandals and moved his tent once more and built another alter to the Lord.There are times when I wish Scripture gave us more insight into what was going on. What was Abram thinking after this latest encounter with God? Did he even comprehend the words God spoke to him? As he walked through the land, was he able to wrap his mind around the idea that all of this would be his–and not only his, but that it would belong to his children?By all appearances, things don’t exactly look secure for Abram. He left home on the wings of promise. Now his nephew has moved away and he is being told that all the land he can see will belong to his family. Yet despite all of the things that may not be going according to plan, we find Abram in the same place where we left him last time–worshiping the Lord.Even though he probably doesn’t understand why things are happening the way they are, Abram still knows where to put his focus. He isn’t locked on the promise. Instead, he is seeking the One who made that promise, the One who called him out in the first place.And as Abram feel on his knees in worship, I doubt that he ever would have expected what’s coming next…

Now to Him who is able to do far more abundantly than all that we could ask or think, to him be the glory in the church, and in Christ Jesus throughout all generations, forever and ever. Amen. ~Ephesians 3:10