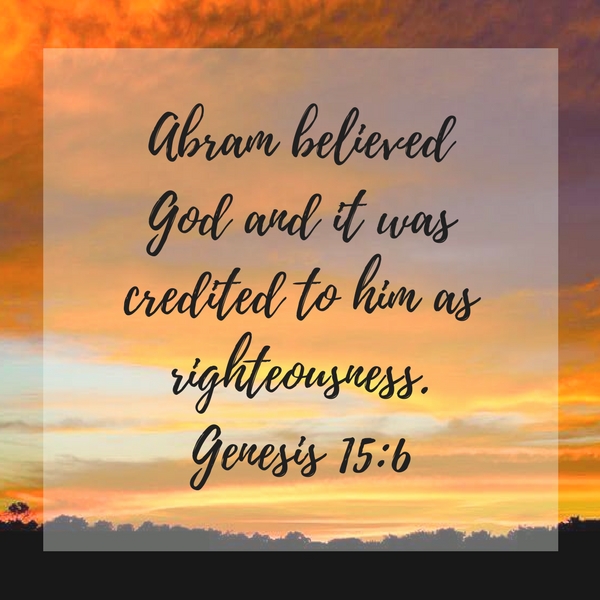 Days, months, and maybe even years have passed since Abram’s trek through the land. He’s getting older. Perhaps the promise God made about descendants and land is starting to look a little blurred and distant, as if it were something from a dream. Lot has been gone for a while now, but they’ve seen each other. In fact, Abram rounded up a rescue party to save his nephew when some neighboring kings decided to wage war against Sodom and Gomorrah, the very place Lot and his family had been living. Lot’s was just one of the families that were taken captive. But Abram and his men fought well alongside friendly kings and defeated the enemies, returning Lot and the others to their home.It is after these things that the Lord appears to Abram again, this time in a vision. “Fear not, Abram, I am your shield; your reward shall be very great” (Gen 15:1).Abram has heard these words before. But this time, instead of causing hope to rise up in him, the words bring about doubt and bitterness. He replies to the Lord, “O Lord God, what will you give me, for I continue childless, and the heir of my house is Eliezer of Damascus?” (Gen 15:2). Why does God keep making these grand promises when Abram doesn’t even have a child of his own? Perhaps Lot would have inherited everything when Abram died, but now everything will go to Eliezer, his servant. Instead of accepting God’s words, Abram starts blaming God for holding out on him, for not giving him a child–the one thing he desires.And again, the word of the Lord came to Abram: “This man shall not be your heir; your very own son shall be your heir” (Gen 15: 4).Now, there is one important fact to remember here–Abram is getting up there in years. When he first set out on this journey, he was seventy-five years old. Not exactly the age people start having children. And some time has passed since then, though we’re not exactly sure how much. It’s probably been a few years at least with all of that traveling. A child at his age? That’s funny, Lord.Before Abram can get a word in about the situation, God tells him to step outside. “Look toward heaven, and number the stars, if you are able to number them. So shall your offspring be” (verse 5).

Without modern day electricity polluting the evening lights, Abram stands out in the desert, away from the fire going at home, and stares up into the sky at millions of stars. I can only imagine what a sight that must have been with God’s words still echoing in Abram’s heart. His mouth probably hung open slightly as he considered the possibility. Offspring as numerous as the stars? Last time God made this promise, He said Abram’s children would be like the dust on the earth. Neither can be counted. How could anyone have a family that large? But something must have happened as he stood there gazing at the heavens because verse six says that Abram believed God and God counted it to him as righteousness.Then God reminds Abram who He is and what He’s done, how He called Abram out of his homeland so that He could give him this land. Still gaping at the stars above, Abram poses a question: “O Lord God, how am I to know that I shall possess this?”I’ve seen this question before in almost this exact wording. When the angel appeared to Zechariah at the beginning of the Gospel of Luke and told him that his wife would bear him a son, Zecharaiah asked, “How shall I know this, for I am an old man and my wife is advanced in years” (Luke 1:18). Because of his doubt and disbelief, Zechariah was made mute until the child was born. Abram’s voice, however, wasn’t taken from him.It’s already been stated that Abram believed the word of the Lord concerning his offspring. So while the words sound a lot like Zechariah’s question, the heart behind those words is more like Mary’s. Mary too was approached by an angel and told that she would bear a son she was to call Jesus. The girl was young and engaged and had never been with a man, so of course biology begs the question, “How shall this be, since I am a virgin” (Luke 1:35). She believed but didn’t exactly understand how such a thing was possible.It’s the same with Abram. He believes, but he doesn’t see how an old man without any children to speak of could possibly have as many children as there are stars in the sky. “How am I to know that I shall possess this?”I wonder what sort of sign Abram expected when he asked that question? The Lord to stand in front of him in person, a star to shoot across the heavens, a tremor to shake the earth beneath his feet? However, instead of a sign, the Lord made a covenant with Abram. He told Abram to take a heifer, a goat, a ram, a turtle dove and a pigeon and cut each animal in half. The dead animals drew in the birds of prey, who were ready for dinner, but Abram kept shoeing them away while he waited for whatever it was that the Lord was going to do.The sun went down and darkness fell upon Abram as he was taken into a deep sleep. While he slept, the Lord spoke to him about his offspring. What He said, however, wasn’t at all expected. God spoke about how Abram’s offspring would be foreigners in a foreign land where they would be servants afflicted by their masters for four hundred years. However, it would last no longer than that and the Lord would bring judgement and free Abram’s people and return them to this land. Abram would not see such affliction, but would die in peace.As the sun rose, the Lord passed between the halved animals, making a covenant with Abram. Such a practice, as I’ve heard it explained, meant that the parties entering into the covenant entered under penalty of death if either of them didn’t keep their side of the promise. Here, only God makes this covenant walk. He will do it. He will give Abram offspring and they will inherit this land. All Abram need do is believe and follow.When Abram awoke, I wonder if he felt like it was a dream. So much has happened. God promised him land and a large family. But not only that. God also promised him a son–his very own son!

I imagine that Abram ran back to his tent that morning, picked up his aging wife and spun her around. “I’m going to have a son! God promised me! It’s going to happen! I’m going to have a son!” And then he darts back outside to process all that has happened, leaving his wife in the tent to stew on such a promise, to doubt it. Her husband seemed so happy. Of course he would be. They had probably tried for decades to have a child, but she just couldn’t conceive. She didn’t want to let him down, didn’t want to take this joy from him. So she came up with a plan. Perhaps this is how God meant for it to be all along…Live in His love!