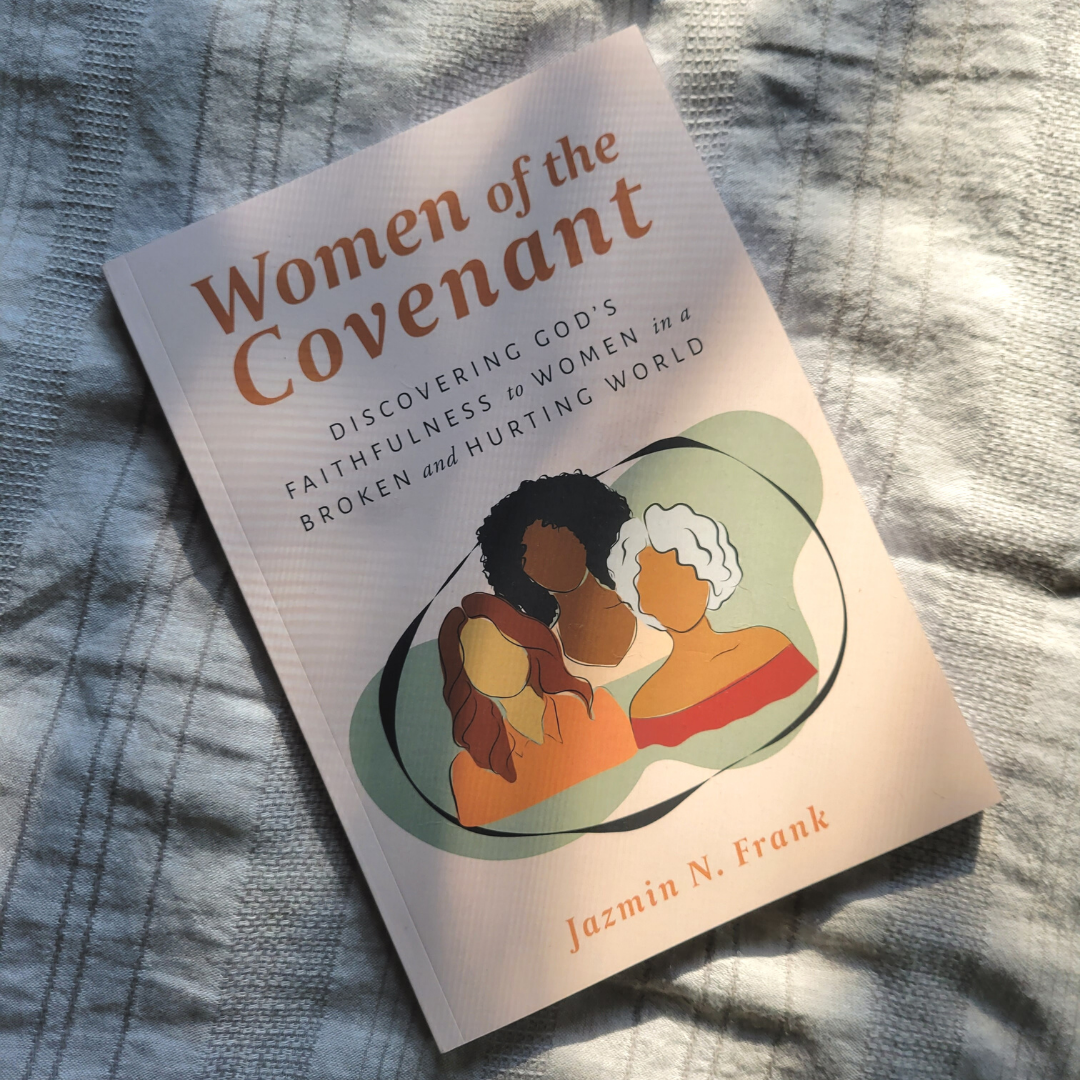 This post may contain affiliate links. I will earn a small commission on any purchases made through these links. Read the full disclosure here.

For much of this past spring, I spent my time with my nose stuck in various passages of Scripture, studying the stories of women throughout the Bible.

Many of the women I was familiar with–women like Esther, Ruth, and Sarah.

But there were others I struggled with–Tamar, Bathsheba, Lydia.

Some of those struggles in unearthing their stories were due to the fact that they lived in a world so different than ours. It was hard to relate or understand why they did the things they did.

Other times the issue I ran into, especially with women in the New Testament, was that some women really don’t get much screen time. We encounter them for a verse or two and then we never hear from them or about them again.

Many a study has been written about the women of Scripture. I wrote one called Women of the Covenant. It can be easy to lean into the studies already available to us.

And there’s nothing wrong with picking up a Bible study to work through. But sometimes the thing we want to study doesn’t exist in a Bible study, and we have to do the work of studying ourselves.

When it comes to Bible study, if you’ve been around here for a bit, you’ve probably learned that I don’t just like giving content. I like teaching skills.

I want to give you the tools you need to do a study on your own.

That’s why this post is going to focus on how to do your own Bible study on the women in Scripture.

Why study the stories of women

First, let’s talk about why it is important to study the stories of women.

The short answer is that the stories we find in the Bible–about men and women–teach us about a God who is gracious, loving, merciful, just, and pursues us with abandon.

Every time we study someone else’s story, we learn about God’s heart and we’re inspired, encouraged, or challenged in our own faith journey.

But to study the stories of women specifically gives us a special look at God’s heart toward women.

One of the things I love about God is how He raises up the marginalized.

In Scripture we see Jesus giving dignity and honor to the women He interacts with.

We see God extending provision to widows in the law.

We see the thread of His covenant faithfulness continuing through and including women, even those who are broken, hurting, and downtrodden.

To study the stories of women in the Bible is to study God’s heart.

These stories matter just like every other story in Scripture.

Tips for studying the stories of women in Scripture

When we study the stories of women in the Bible, there are a few things we should be aware of: 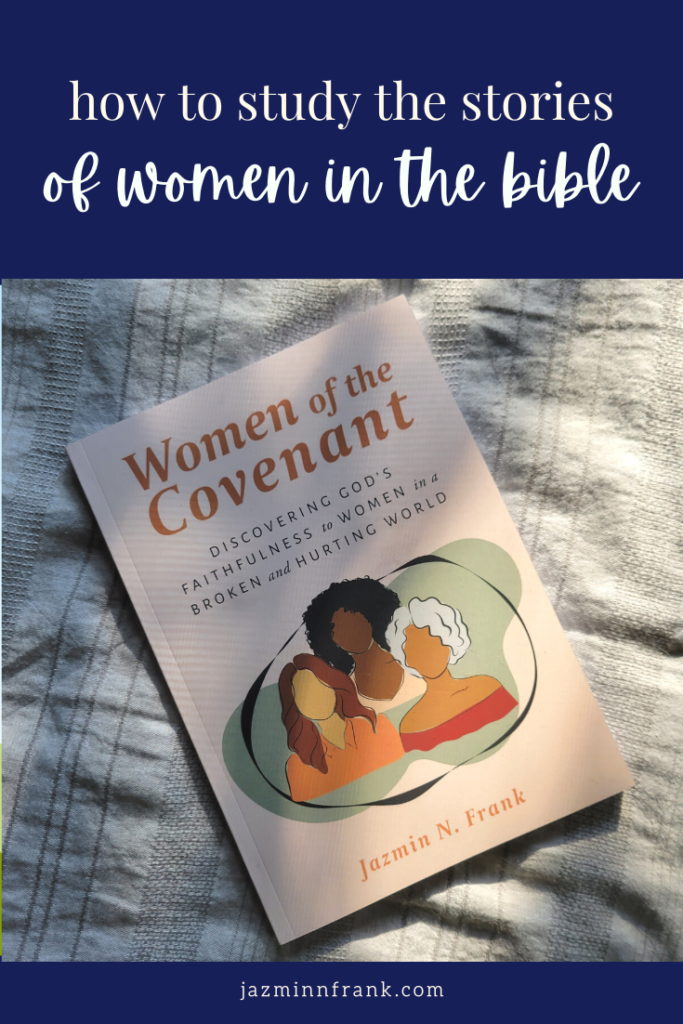 One of the things I ran into when I was studying Tamar’s was some of the cultural awareness the original audience would have had that I do not.

Tamar’s story is found in Genesis 38. She was a Canaanite woman who married the eldest son of Judah, one of Jacob’s sons and Joseph’s older brother. When her husband died, she was married off to his brother.

To our modern ears, that sounds really strange, but in Israelite culture, this was known as the Levirate law.

In that culture, a women’s identity and security was connected to the men in her family. Until she was wed, her security came from her father. When she married, she joined the household of her husband. The patriarch of that family was responsible for making sure she was taken care of and to provide her with a son to take care of her later in her life.

For Tamar, when her late husband’s brother did not fulfill his duties, God took his life, and Tamar was left a widow once again. Judah promised that his youngest son would become her husband when he came of age. He sent her back to her father’s house to wait.

However, Judah never followed through on that promise, so Tamar took matters into her own hands, disguised herself as a prostitute, and slept with him.

When it was discovered that Tamar was pregnant, Judah had her dragged back to his house so that her unfaithfulness can be dealt with. When the truth is revealed that Judah is the one who got Tamar pregnant, Judah says this:

In my previous reads through Tamar’s story, I had never understood how Tamar was celebrated as the righteous one, or why she became one of only five women listed in Jesus’ genealogy.

Judah had a responsibility to Tamar. As the patriarch of his family, he was responsible to taking care of her and making sure she was provided for.

Instead, he shirked his duties out of fear of losing yet another son, and forced Tamar into a desperate situation.

Through Tamar’s story, we see a God who raises up those who have been cast aside, forgotten, and wronged.

Another thing to pay attention to when studying the stories of women in Scripture is the context.

Where does her story fall in the larger context of the passage, the book, and the larger story of the Bible?

The Bible is one continuous story that tells God’s story and His interactions with humanity, and we need to keep this in mind even while we’re studying smaller passages.

Her brief story is found in the book of 2 Samuel, in the midst of David’s reign as king over Israel.

Actually, Bathsheba enters the biblical story because of David.

In the spring when kings march out to war, David sent Joab with his officers and all Israel. They destroyed the Ammonites and besieged Rabbah, but David remained in Jerusalem.

One evening David got up from his bed and strolled around on the roof of the palace. From the roof he saw a woman bathing—a very beautiful woman. So David sent someone to inquire about her, and he said, “Isn’t this Bathsheba, daughter of Eliam and wife of Uriah the Hethite?” (2 Samuel 11:1-3)

David was in a place he shouldn’t have been–on his roof when he should have been away at war–when he happened to catch a glimpse of a woman bathing.

Contrary to what some scholars have said, it was unlikely that Bathsheba was bathing in plain sight. She didn’t strip down to catch the king’s eye. In fact, this bath was a ritual cleansing required of women once their monthly bleeding had stopped (verse 4).

So David sees her, inquires about her, and calls her to him. He sleeps with her, and she ends up pregnant. David tries to cover the whole thing up through manipulation and the murder of Bathsheba’s husband.

This is how Bathsheba is remembered.

However, when I went back to study her story, I paid special attention to the context.

The truth is, we don’t know much about Bathsheba. There is nothing definite here about her motivations, not many hints about her character or the type of person she was. All we see is what happens.

That’s because the focus really isn’t on Bathsheba, but on David.

This is the point in his story where faithful David makes some bad choices and the Scripture narrative takes a turn. Bathsheba just happened to be in the wrong place at the wrong time.

When we study the women of Scripture, we need to be mindful of context. We need to take in the whole story.

Sometimes we won’t get all the answers we want about these women because they simply aren’t in the text. We can make some inferences, consider possibilities and different angles, like with Bathsheba, but ultimately we need to lean on the literary context.

Resources and reference materials can be very helpful no matter what you’re studying in Scripture, but I find this especially true when studying the stories of women.

When I was working on Women of the Covenant, I had a stack of about 12 additional books as well as a Bible handbook, and my trusty ESV study Bible.

I wanted to do this study and the stories of these women justice.

I wanted to be sure I understood the culture and context.

I wanted to see how God’s covenant faithfulness tied all of their stories together.

While I will always tell you to go to Scripture first, having a few trusted resources can help you dive deeper into their stories.

Some of my favorite resources include:

Reading biblical fiction connected to the women you’re studying can also be helpful.

Good historical fiction writers do their research. While there can be some artistic license taken to fill in details of the story, I find these kinds of books are really helpful for immersing me in the culture of these women.

Here are some of my favorite biblical fiction:

Bread of Angels by Tessa Afshar

A Light on a Hill by Connilyn Cossette

We have a lot we can learn from the women of Scripture as we study their stories and pay attention to how God interacts with, protects, and provides for them.

If you’re interested in learning more about the women of Scripture, check out my Bible study Women of the Covenant: Discovering God’s Faithfulness to Women in a Broken and Hurting World.

This study also comes with a leader guide if you want to get a group and study together.

Want a look inside first? You can grab a preview of the first three chapters here.

Are there any women in Scripture whose stories really encourage you?

Anyone you’re looking forward to studying next?