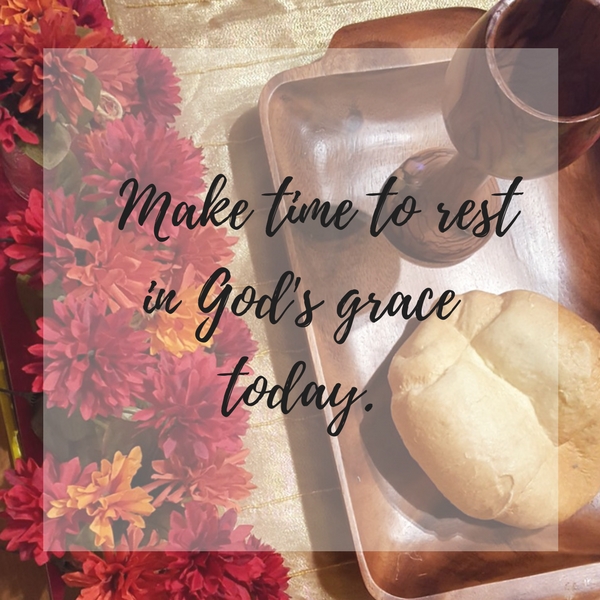 That phrase has been sitting on my head all week, like a reminder. Yes, you have a lot to do, Jazmin; but don’t forget to rest.

I don’t think we know what rest really means in our culture.

America is all about going and doing. Seven day work weeks. Seven days that stores and restaurants are open. Seven days of non stop doing what I gotta do and doing what I want to do. All about me. Even in the Church I think we’ve lost the art of the Sabbath.

Travel with me, will you. We’re going back in time, back to the beginning when the world was fresh and new. God had just made it all–the entire universe. After each day of creation He smiled and deemed it good. But that sixth day, shew! That was very good! You know why? Because God has just finished placing His crown on Creation, His signature work–humanity. Now man and woman strolled through the garden, caring for the land and the creatures God put there.

God, the maker of the universe, resting? Why? Did all that creating tire him out?

I don’t think so. I think He was being the good Father He is and setting an example for His children.

Let’s jump back in that time machine and travel forward a bit to the time after Israel had been freed from their captivity in Egypt.

Moses is speaking with Yahweh up on the mountain, receiving instructions and guidance and laws about how God wants His people to live. The final thing God covers before Moses heads back down the mountain is the law of the Sabbath. God has already given Moses the command to “Remember the Sabbath and keep it holy” when He gave him the Ten Commandments. But He goes into more detail now. And actually, to us non-Jews, His laws concerning the Sabbath seem a little harsh.

Moses and the people were commanded to keep the Sabbath, this day of rest and worship. It was a day where no work was to be done, a day meant to reflect God’s work in creation–six days a week they were to work and on the seventh they rested. And the punishment for those who worked on that day? Death.

Why, God? Why such a harsh punishment for something that seems so small? I mean, what’s the big deal with this whole rest thing anyway? Is work really that bad?

“Above all you shall keep my Sabbaths for this is a sign between me and you throughout your generations that you may know that I, the Lord, sanctify you.” (Ex. 31:13).

I don’t know about you, but I work hard to get things right. You might even say that the work I do is done to prove I’m worth something, that I’m capable and I’m good enough. The thing, though, with God is we can’t earn His love or His grace. It’s given. And that’s something we humans still can’t seem to fully understand. And like that grace and love, the Sabbath was given as a sweet gift, not only providing physical rest, but also reminding us of our source of strength and provision and our very breath of life.

When I started college, my dad encouraged me to set aside a day to not do any schoolwork. It’s easy to get swept up in all that needs done, but I formed the habit. All my work was done on Saturday and Sunday was my day with Jesus. Sometimes friends joined us. Sometimes I went to the park or went out of town for the day. Sometimes I just sat in my room and read or watched a movie or napped (Sundays are great nap days!). And I kept up that habit for all four years.

Now, don’t get me wrong. There were some Sundays where I had to do something because it came up during the week that didn’t allow me to work a previous day or I was working on something with a group and Sunday was the day they were all free. But that’s the other thing about the Sabbath. Yes, it was an Old Testament law with serious consequences, but Jesus gives new light to it in the Gospels.

Our time machine takes us now to the time of the New Testament.

The Pharisees were a stringent group, following the letter of the law and condemning those who didn’t. The problem was, they cared more about the rituals and rules than about the God who gave them. You see, one day Jesus and His disciples were walking through a field and the men started plucking grain and eating it. The religious leaders saw this and started wagging their fingers at the group. “Look, your disciples are doing what is not lawful to do on the Sabbath” (Matthew 12:2).

I wonder if Jesus rolled His eyes, because I certainly would have at that point. And actually Jesus had multiple encounters with the Pharisees along this line. Jesus would heal a man or woman and the Pharisees would come running, ready to punish him and throw him out of town–anything to get rid of the guy. But Jesus was quick to remind them the purpose of the Sabbath: “man is not made for the Sabbath, but Sabbath for man.”

For all of us rule followers, Jesus reminds us that it is a gift, and quite honestly, if our hearts are set on knowing God and pleasing Him, there’s no “wrong way” to do the Sabbath. It doesn’t have to be on Sunday. The point is that this is a day of worship and rest, a day of community and setting aside daily work for one day to remember who the Giver of Life is and that He is the one who sanctifies and sets us apart. No amount of work saves. God does.

But I think Sabbath isn’t just a once a week thing. Remember that phrase I mentioned that’s been stuck in my head this week? Daily grace.

I think it’s important every day to set aside time, to take a mini Sabbath to just rest and sit in God’s presence and remember that He is God. Nothing we do saves us. No amount of work saves us. I’ve found over the last several weeks that when I take an hour to stop and rest in the middle of my day instead of constantly going, trying to get all my work done, I’m actually more productive. Funny how that works.

So, how do you spend your Sabbaths? Are you in the habit of taking one day off a week to spend by yourself, with Jesus, and with your community? I know it sounds impossible. There’s so much to get done. But try it. I assure you that God knew what He was doing when He set this up. And even He rested! Work isn’t that important. Not compared to knowing Christ.