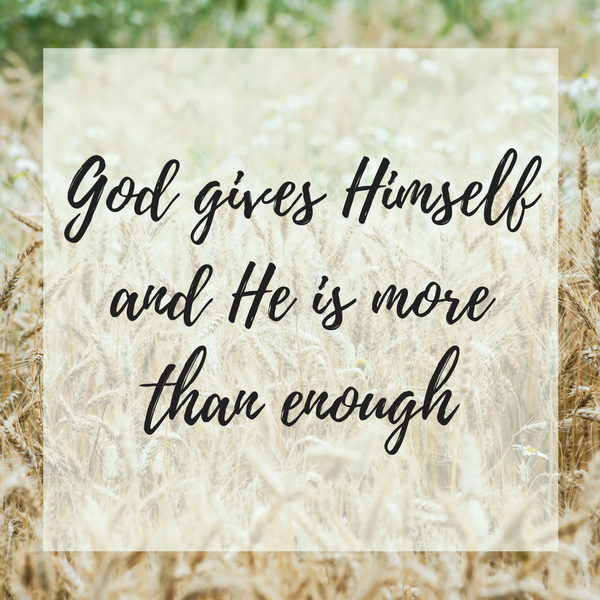 And my God will supply every need of yours according to his riches in glory in Christ Jesus. ~Philippians 4:19 (ESV)

As Philip looked out over the landscape, everywhere his eye fell, all he could see were people. Probably thousands of them, stretched out in this large mass, everyone having come to hear the Teacher.

It still surprised Philip how to crowds had found them even here in this deserted place. For months Jesus’ popularity among the people had been growing. They came from everywhere, eager to hear Him speak and anxious for His healing touch.

Everyone was amazed and bewildered by this man from Nazareth, including Philip.

Drawn to the man in an uncanny sort of way, Philip had left his home and accepted Jesus’ invitation to “follow me.” Philip even invited his friend Nathanael to come too. Since then he had watched Jesus do impossible things–turning water into wine, casting out demons, healing lifelong ailments.

Jesus was a miracle-worker.

And the most compassionate man Philip had ever met.

Which was why He hadn’t sent away the crowd when they found their small group a good distance from the nearest town.

Jesus had spent the last few hours speaking and teaching about the kingdom of God and healing those who were sick. But now the day was waning, and Philip’s grumbling belly reminded him that it was mealtime. It was time to break up the crowd and send the people home.

While Jesus continued teaching, Philip moved toward Nathanael, who was standing off to the side a few feet away, watching the crowds.

“It’s getting late,” Nathanael commented, having the same thought Philip did. “He needs to send the people away so that they can return to one of the nearby towns and get something to eat.”

Before Philip had the chance to nod in agreement, he heard someone call his name.

It was Jesus. “Philip, where can we buy bread so that these people can eat?”

For a moment Philip couldn’t respond because of the ridiculousness of Jesus’ question. Looking out again over the crowd, he knew there had to be at least a few thousand men, not counting the women and children. “Two hundred day’s wages worth of bread wouldn’t be enough for each of them to have a little.” Philip finally answered.

Jesus made no response, but the look in His eye said He was not surprised by Philip’s reply. But there was something else in His expression too–a hidden smile shimmering behind Jesus’ eyes that made Philip pay extra attention. He’d been with Jesus long enough to know that look.

Something was about to happen.

Turning to the other disciples nearby, Jesus asked them, “How much food do we have?”

Andrew stepped forward now. “There’s a boy here who has five barley loaves and two fish, but what are they for so many?”

Looking back toward the crowd, Jesus told the disciples, “Have them all sit down.”

Philip and some of the others moved into the crowd and encouraged everyone to sit, but even as he went about the task, Philip watched Jesus. He saw when Andrew brought the boy and his small lunch to the Teacher. He watched as Jesus bent down and smiled at the boy, then accepted the meager offering.

By this time word had passed among the crowd and everyone was seated, so Philip returned to Jesus just as He set the food inside two baskets the disciples had used to carry supplies during their travels. Then Jesus lifted His hands and His gaze to the sky and blessed the food. When He looked down again at the food, Philip followed Jesus’ gaze and jumped back at the site of the two baskets overflowing with bread and fish.

The disciples were stood there stunned for a moment, then hurried off to find other baskets to use to pass out the food. Philip joined them, and started passing the food among the people. No matter how many times he returned for more, it looked like they hadn’t even made a dent in their supply. Nearly an hour later, after everyone had eaten, the disciples gathered up the leftovers.

Two scrawny fish and five small loaves had been miraculously multiplied so that a crowd of over five thousand people walked away with satisfied bellies, and twelve baskets sat full of leftovers. 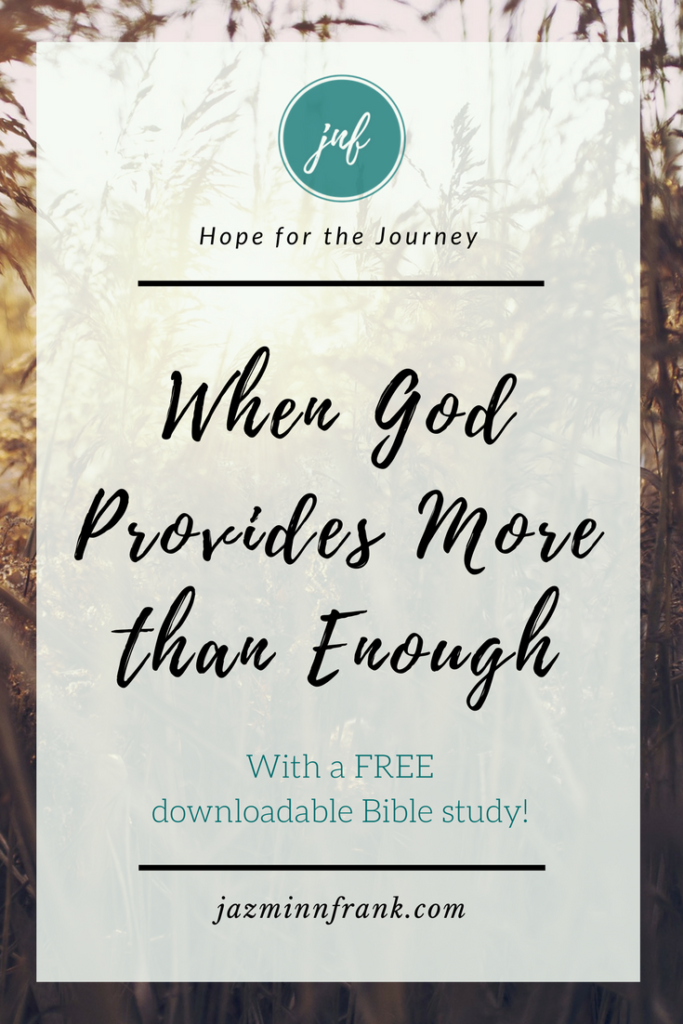 The disciples weren’t expecting a miracle that day. They were tired from their journey and anxious for a few moments alone with Jesus. But then the crowds had shown up. They’d come with their sick and injured, those they wanted Jesus to touch and heal. They sat and listened to Jesus teach about God the Father and His Kingdom. And then Jesus had surprised them all.

How long had the people been there that day? How far had they traveled? How long did they suffer grumbling bellies because they didn’t want to leave Jesus, leave His presence.

So often when I read this story, I focus on the disciple’s response and Jesus’ miracle, but this time it has me thinking about the why.

Jesus was very intentional about the miracles He performed. He didn’t heal everyone. Not every blind person in Israel regained their sight and not every chronically ill individual experienced freedom. Yet here, Jesus chooses to feed a massive crowd rather than sending them away.

Rather than sending them away with empty bellies, He sent them away full and satisfied–spiritually and physically.

And the disciples were left with twelve baskets of leftovers–one for each of them. Reminders that He was capable of lavishing much on those who love Him–that He didn’t need two hundred days’ wages or anything more than a willing heart to take not-enough and multiply it so that it was more-than-enough.

If you walk away from this series with nothing else, I hope you leave with the knowledge that God cares for you a whole lot. Whether in seasons of famine or when God asks you to depend on Him daily, He is present, providing what you need, and reminding you with every breath that He cares for you.

And sometimes, when you least expect it, He turns that daily provision into something lavishly overwhelming. Not-enough becomes more-than enough. The impossible becomes possible. God’s love poured out in overwhelming quantities.

It’s the greatest gift He’s ever given.

Every day, every season, God provides His love, His grace, His presence.

God gives Himself and He is more than enough. 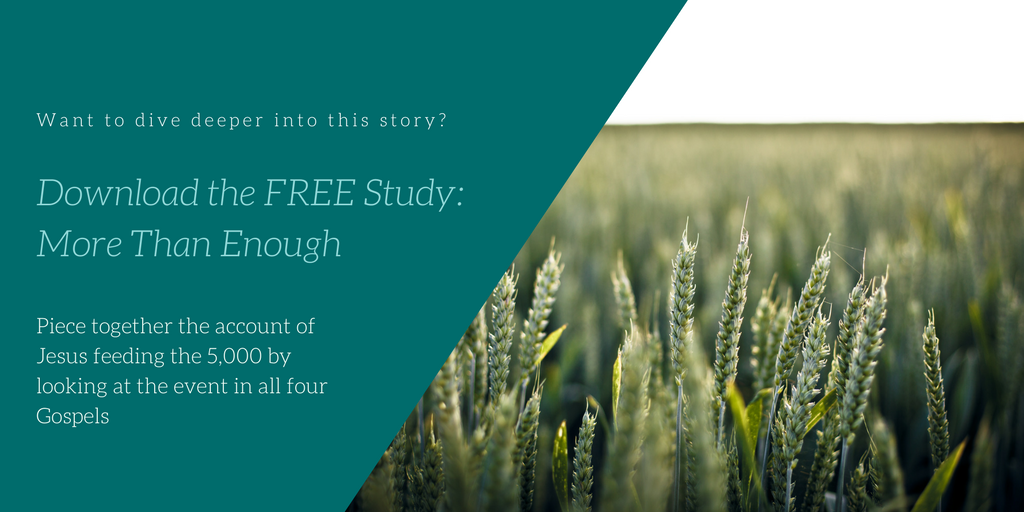 The account of Jesus feeding the 5,000 can be found in all four of the Gospels. While preparing for this post, I read all four versions of the story, beginning with Matthew and working through to John. It was so fascinating to see how each version of the story added in details, left some out, and helped create a more complete picture of what that day must have been like.

I benefited so much from the study that I thought I’d make it available for you too! Just click the link to download the More Than Enough Bible study.