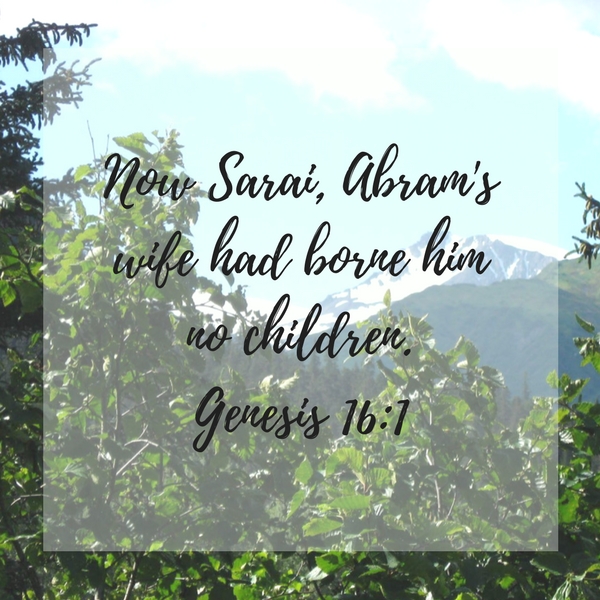 I wonder how many decades Sarai held onto hope that someday she would get pregnant. How many times did she wake up after spending a night in her husband’s arms and wonder if maybe this time things would be different. I wonder how many times she had to face the hard reality that no matter how badly she wanted it, she just couldn’t get pregnant. And now with Abram’s news that God had told him he would have a son, Sarai feels the sand grating at the bitter reality.

Perhaps Abram would have a child, but it wouldn’t be by her.Right here in the beginning of Genesis 16 we see an important note. Sarai has not borne Abram a child. But verse 2 informs us that she has a female servant named Hargar, an Egyptian: “And Sarai said to Abram, ‘Behold now, the Lord has prevented me from bearing children. Go in to my servant; it may be that I shall obtain children by her'” (verse 2).Obviously Sarai doesn’t see herself fitting into God’s plans for Abram’s child. She’s been barren this long and nothing is going to change. The Lord has prevented it, she says. And you know what? Abram listened to Sarai. Instead of consulting God and getting more clarity on this promise of a child, he goes along with Sarai’s plan.What was Sarai thinking? And I don’t mean this in an accusatory way. Having a child by your servant was a cultural thing at the time, but did she really think that this would end well? I wonder how she felt sitting outside the tent while Abram went in to Hagar. Did she feel forgotten? Angry? Overlooked? Not good enough? Why hadn’t God given her children? And why would he give Abram such a promise that she couldn’t be a part of?The night passed and soon Hagar found out that she was pregnant. Abram was going to have a child. Hagar’s abdomen wasn’t the only thing swelling over the next few months–so was her pride. Verse 4 says that when Hagar saw that she had conceived, “she looked with contempt on Sarai.” Not only could Sarai not get pregnant all these years, but now the servant she gave to her husband serves as a constant reminder of that fact.

Upset and hurting and broken and bitter, Sarai goes to her husband.“May the wrong done to me be on you!” she says accusingly. “I gave my servant to your embrace, and when she saw that she had conceived, she looked on me with contempt. May the Lord judge between you and me!” (verse 5). It seems Sarai has forgotten, or chooses not to remember that this was her idea in the first place. With both hands raised in surrender as if he had nothing to do with the situation, Abram backs himself out of the tent saying, “Behold, your servant is in your power; do to her as you please.”That was all the permission Sarai needed to turn around and deal harshly with Hagar. She treated her so badly that one day Hagar finally just up and left.Phew! I need to stop and take a breather for a moment. It’s like we stepped right into an episode of a Canaan soap opera! But that’s what happens isn’t it when we take matters into our own hands? Things get messy, drama arises, and more damage than good is done. Sarai thought she was doing something good; but her actions were borne out of doubt and impatience rather than expectation.You see, expectation isn’t all bad. We’ve seen with Abram that things haven’t exactly gone like he might have expected, but he keeps coming back to God, keeps believing His promises, and keeps worshiping Him along the way. Well, at least until this mess. Now that Sarai is getting more of a place in this story, we can see that she has the opposite problem with expectations. Sarai doesn’t expect good. She expects things to keep going for her like they’ve always gone. She expects the worst. She doesn’t expect her situation to change. She doesn’t expect God to move in big ways and bless her.This type of expectation, or lack of expectation, can lead us to make decisions that cause even bigger messes. These decisions are usually driven by fear and bitterness and doubt, and they steal joy and rob us of hope. God hasn’t said it yet, but we’ll soon find out that Sarai is part of His plan.

So why didn’t God just tell Abram that Sarai would be the one to bear him a son when God made that covenant? I mean, He’s God, right? Surely He would have known that lack of information would drive Sarai to hatch such a plan? Of course He knows. But as for why He did it this way…well…I’m not sure. His ways are mysterious and higher than we can understand. Perhaps it had to do with trusting His timing and His ways. I don’t know. But I do know that this part of Abram and Sarai’s story isn’t over yet. In fact, we’ve got another set of expectations to deal with as Hagar flees.Once Hargar has run as far as she can, she finds herself in the wilderness near a spring of water, and an angel of the Lord appears to her. “Hagar, servant of Sarai, where have you come from and where are you going?”“I am fleeing from my mistress Sarai” (16:8).Talk about expectations not being met. Here she was serving her mistress when she is suddenly given in marriage to her mistress’s husband. She finds herself pregnant and looks with contempt on Sarai, then is run out of town. For this girl from Egypt, things definitely don’t seem to be going the way she might have expected. Did you also notice that she only answers part of the question? She states where she is coming from, but not where she is going. Does she have any idea of where she is headed?The angel replies, “Return to your mistress and submit to her” (verse 9).Submit to Sarai? That’s a tall order. But with it comes a promise for Hagar as well. “I will surely multiply your offspring so that they cannot be numbered” (verses 7-10). Hmmm. That sounds a lot like the promise God gave to Abram. Could it be that the child Hagar is carrying is the child God promised Abram after all?The angel continues, telling Hagar that the child she is carrying is a boy, and his name is to be Ishmael, which means “God hears.” He will be a man of conflict, a wild donkey of a man, with his hand against everyone and everyone’s hand against him, and he shall dwell over against all his kinsmen (verses 11-12). Not exactly the most flattering description in my mind, but Hagar takes the promise and walks away encouraged by her encounter with the God who sees. She returns to Abram’s camp and when her time came, she gave birth to a son and they called him Ishmael. It actually says that Abram named him (verse 15). Hagar must have told him about the conversation at the spring and how God had seen her.Holding his newborn son in his arms, did Abram feel like God had seen him too? At age eighty-six, eleven years after God called him out of Ur, did Abram think the waiting was over, that the promise of a child had been fulfilled? By all appearances it seemed Ishmael would be his heir, the first of many descendants as numerous as the stars.But as we’ve already mentioned here, God’s ways are not our ways. He has plans are beyond anything than we can imagine, and He brings them about in ways and in a time frame we may never understand. Despite what Abram thinks he might know about God’s plans, he hasn’t seen anything yet!Live in His love!